On Wednesday August 8th in 1900 a meeting took place at Christchurch Boys High School. The school, having then been open for 19 years, had growing stocks of former pupils making their marks at community, sporting and political levels. 70 such men were present at the meeting – the large number evidence a proposed new alliance was well supported.

Dr Henry Thacker took the chair. The big man, said to weigh 18 stone, commanded the attention of the gathered crowd…

Dr Henry Thacker took the chair. The big man, said to weigh 18 stone, commanded the attention of the gathered crowd. His passion and oratory skill would later lead him to work as a respected physician, parliamentary member, mayor of Christchurch and renowned Cantabrian.

On that day however his speech went straight to the point, explaining the objective of forming a new club. The proposal was moved by Bob Speight and seconded by Tom Reese. Their words, neatly handwritten in the old minute book, record the first meeting of the Christchurch High School Old Boys Rugby Club.

It was a simple beginning for a club that has gone on to play an incredibly significant role in New Zealand's national sport. From the vision of its founders to the present day Christchurch High School Old Boys has grown in size and reputation. It continues to lead the way in Christchurch with how rugby is developed, supported and played.

The club, now widely known as the 'Old Boys' or 'Polar Bears', maintains ties with several rugby-proud schools Christchurch schools. We understand the importance of guiding and supporting the next generation of Old Boys.

We are proud of the supportive environment and wide-ranging experiences we can offer both new players wanting to start rugby in Christchurch and those looking to take their game to the next level on the regional, national and international fields.

It’s a commitment to the community within and around the club that is important to our people. So the club's doors are always open, and we welcome players, neighbours, rivals, tourists, mothers, wives, partners, girlfriends, boyfriends, sisters, brothers… everyone who’s keen to share our love for this great game. It’s why, to our members and supporters, Old Boys is quite simply 'the Greatest Little Rugby Club in the World'.

THE QUICK CLEAN OUT

A brief overview of our club:

All Blacks: 31 of our current or former members have pulled on the silver fern of the world’s premier rugby team, making our club one of the most successful in New Zealand.

The expertise and experience

We are proud to count some of the leading minds of New Zealand rugby amongst our management team. With experience representing our country at the highest echelon of rugby performance, their expertise and understanding is immensely valuable to our club.

​​​​​​​You can find our training grounds at the Riccarton end of Hagley Park.

Our clubrooms are located at 12 Riccarton Avenue, up the driveway behind Hagley Tennis.

Trainings are held weeknights during the season on fields 4 & 5.

​​​​​​​Our Changing Sheds are located at 5 Ayr Street, Riccarton. There are 6 seperate changing sheds with a large shared shower block. 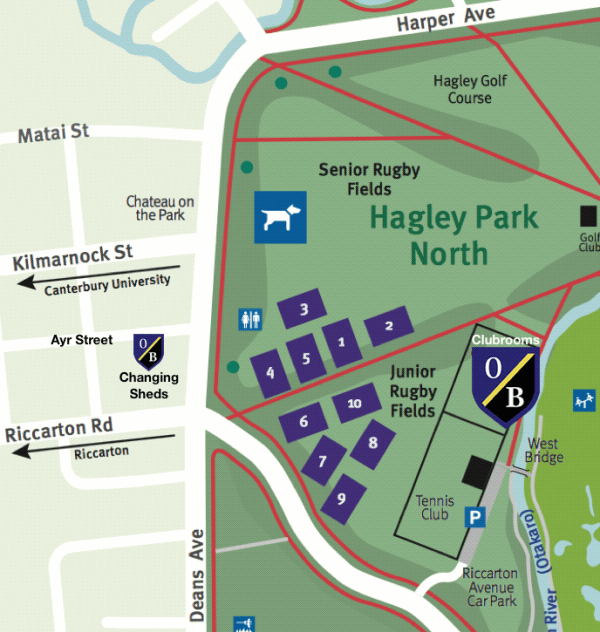 We regularly play in the Patagonia Cup, sending a squad to Argentina for this prestigious international competition.

We take pride in how Old Boys' is as much a community as we are a club, supporting our sponsors and growing our club to ensure success for all.